If you are wrestling with depression you’re not alone. According to the National Institutes of Health (NIH), depression affects 38 million Americans each year.

Additionally it is estimated that up to 75 million people will suffer a depressive illness during some point in their lives.

Here are the most common symptoms of depression:

Typically, doctors including psychiatrists prescribe antidepressant medications, such as Prozac or Lexapro, to treat depression. While these medications are helpful for some people, they also make symptoms much worse for others. The side effects of these medications can be alarming, and include hallucinations, violent outbursts, volatile tempers, psychosis, and suicidal behavior.

We know that depression and panic attacks are a major problem in a person’s life. At NeuroKinetics we treat all of our patients with the utmost care and support.

To better understand the nature of how NeuroKinetics could best help our patients with depression, Dr. Souvestre began to assess their brain function and realized that their brains were not functioning or communicating properly.

He further determined that in many cases his non-invasive BRE or Bio Regulateur Externe helps to stimulate the body’s neurological pathways so that the brain can function properly. This has helped many of NeuroKinetics patients eliminate their depression.

Every patient’s first step is to book his or her Brain Optimization Session with Dr. Souvestre.
We know that many people’s lives have been destroyed because of their depression.

At NeuroKinetics we will help you with your depression symptoms by resetting your brain’s communication and function capabilities.

This is why our initial 4-6 hour Brain Optimization Session has proven so valuable for our patients who want to eliminate their depression.

Your comprehensive Brain Optimization Session allows us to determine how successful our non-invasive therapy and BRE treatment will be with your depression.

The NeuroKinetics approach is backed by Dr. Souvestre’s 30+ years of medical research and his 130 peer reviewed publications that confirm the effectiveness of the NeuroKinetics therapy and treatment protocol.

We have an 85% success rate with health issues such as: 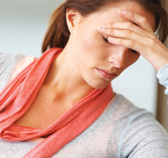 Shirley was 48 when she met Dr. Souvestre at the NeuroKinetics Clinic. She had been experiencing insomnia, constipation, incontinence, sugar cravings, anxiety …>> READ MORE

Schedule your Consultation. Together, we are on a journey towards discovery. Get Started Today!